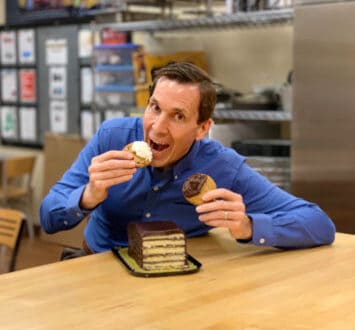 Born in Connecticut, Scott received a mechanical engineering degree from Cornell University and an MBA from the Darden School of Business at the University of Virginia.

In February 2003, Scott joined Ukrop’s as its director of business development and strategy. He held several positions with Ukrop’s until the retail stores of Ukrop’s Super Markets were sold. At this transition in 2010, Scott became the Vice President of Business Development of the newly formed company, Ukrop’s Homestyle Foods. In 2013 he became Executive Vice President where his responsibilities spanned product development, procurement, marketing, and human resources; in January of 2018, he was named President.

Scott connects regularly with the 450-plus associates who work for the company and engages with customers via field activities and formal focus groups. As an executive with Ukrop’s Homestyle Foods, Scott plays a key role in focusing the family-owned business on its purpose to nourish family and communities. The company directly nourishes customers through the sale of great-tasting bakery and kitchen food and indirectly through community events like the Ukrop’s Monument 10K, and through a commitment to reduce chronic childhood hunger in Central Virginia.

Scott is personally committed to a vision of making Richmond a safer place to raise a child. He works to align Ukrop’s with community events, activities, and organizations focused on the healthy development of children.  In the evenings of weekends, you might also be able to find him coaching one of his children’s soccer or basketball teams.

For more than ten years, Scott has served on the Advisory Board of the Salvation Army of Central Virginia, where he lends his consulting and business expertise to help the non-profit with strategic planning and operational issues. He is currently the Chair of the Advisory Board. In addition, Scott is actively involved in retail initiatives and serves on the Board at the Retail Merchants Association.

Scott and his wife, Jacquelin have five children, Robert Scott (deceased), Jack, Jayne, Joseph, and Howe. They are in the process of visiting all 50 states as a family.

Favorite Hobby: Coaching his children’s sports teams.  Rumor has it that his most recent coaching endeavor resulted in a middle school girl’s basketball league championship.  Another interesting note is that Scott is still able to run the Ukrop’s Monument Avenue 10k faster than half of his children (unfortunately, that does not include his 9 year old son).

Why Ukrop’s?: It’s a family affair.  After successful runs as a design engineer and strategy consultation, he joined the “family business” and hasn’t looked back.  Working for an innovative food company that genuinely cares for coworkers, customers and the community has been wonderful. You may see Scott and a few of his children buying lunch together at the Ukrop’s Food Truck or helping customers pick up their holiday meals during Thanksgiving, Christmas, or Easter.